I’ve wanted to do a few tweaks to the home workshop for a while, and today I finally got round to it.

The easiest job was done first, this was to install an additional light fixture to house a Hive Smart Light, this has been added to the global Group ‘Lights’ in the Hive App, by the simple Alexa command ‘Lights On’ or Lights Off, all Hive lights and sockets with connected lights operate, this is really handy feature should we hear any noises in the night.

The light can also be turned on independatly via the Hive  App or via interfaces to other Apps’ or IFTTT. 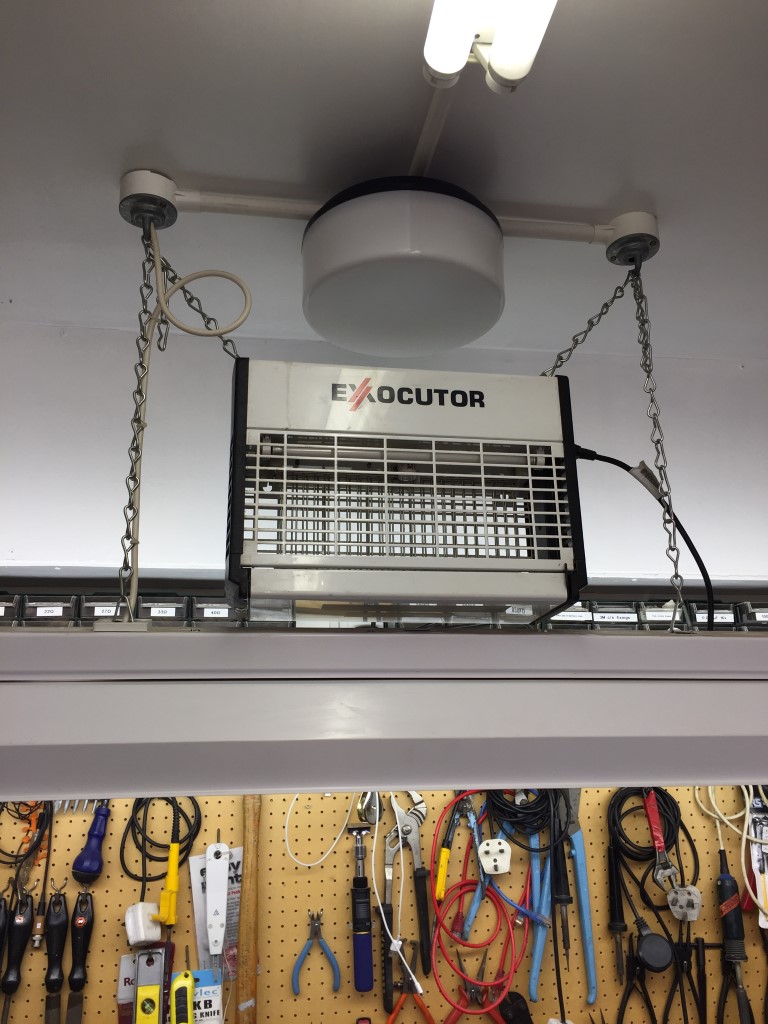 I bought a cheap and cheerful circular light fitting for the Hive light as it’s very easy to wipe clean.  In the application I was using the hive light for, the lamp required an unswitched mains supply.

The besa box Tee above the Exocutor had the ‘loop in, loop out’ wiring for the suspended light, the new fixture was simply fed from permanent live from this and was up and running within 5 minutes.

The second job is something that I have wanted to for ages but the cost of the technology was prohibitive, until now! 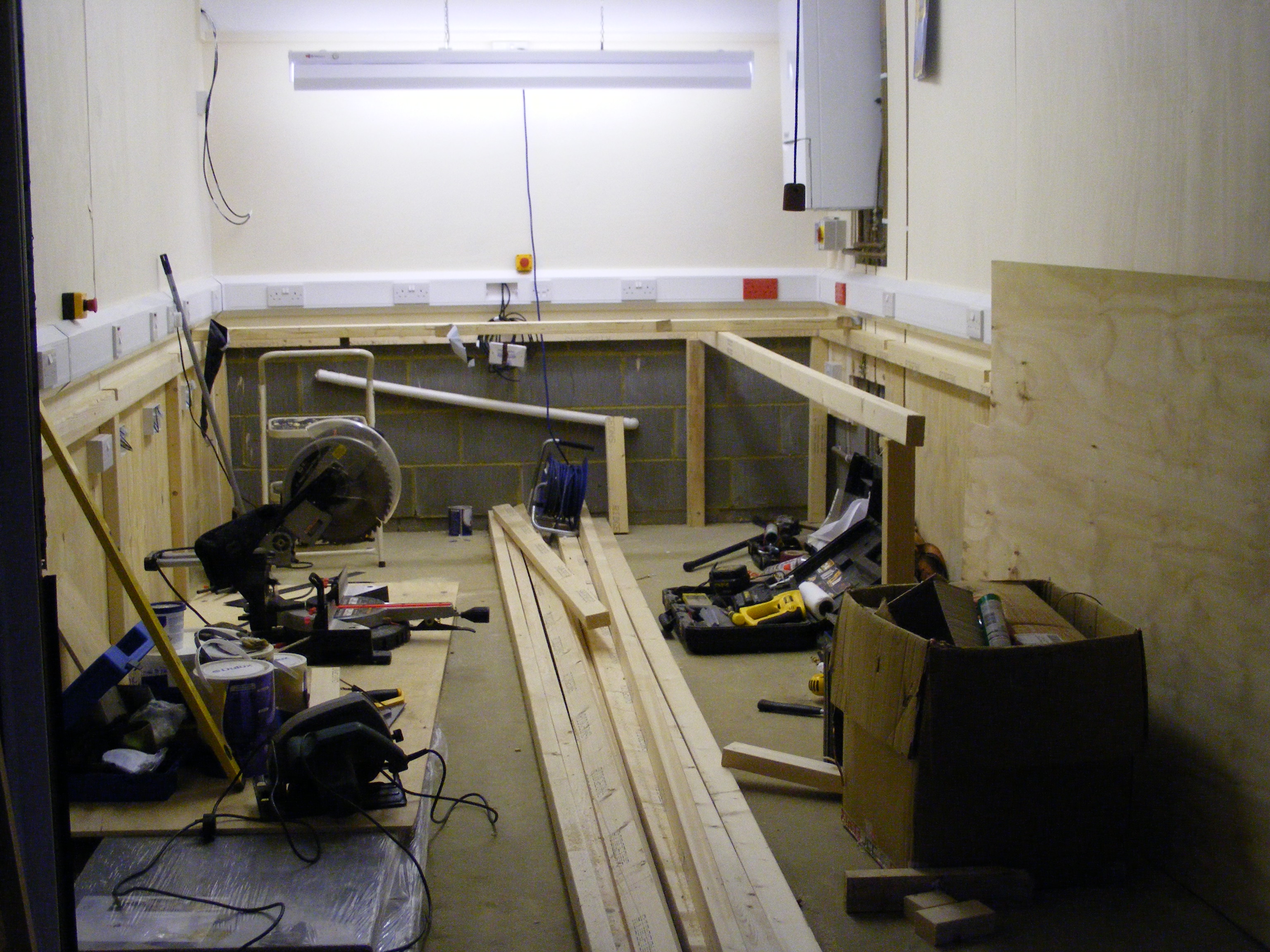 The picture above shows my conversion of a garage into a workshop, this was done in 2007, after the walls were lined, the dado trunking and socket outlets were installed, you can make out that I have used Red and White sockets, the Red ones are not switched via a contactor, whereas the white ones are. 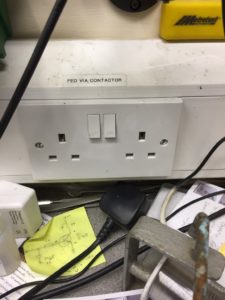 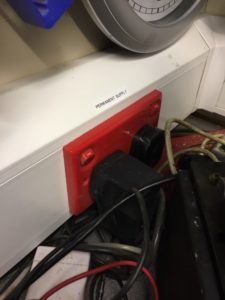 Operating any of the three ‘Emergency Off’ latching buttons, will disconnect the sockets and non Red fused connection units.  A Red LED indicator by the bench  illuminates when the Power to the sockets is ON. 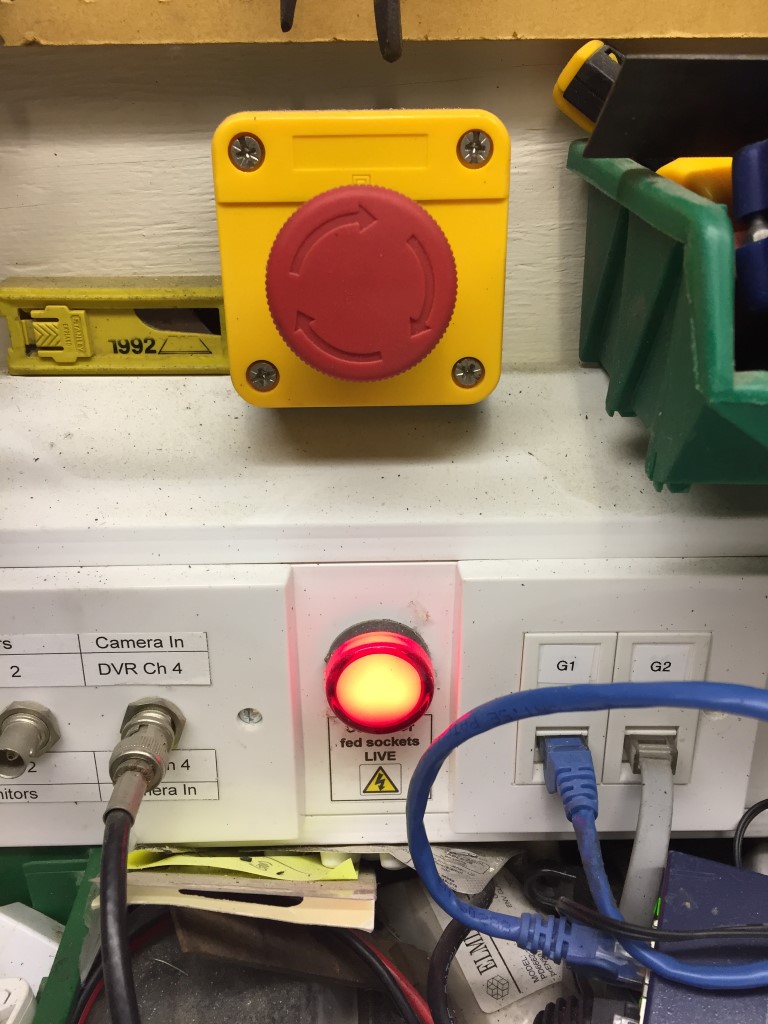 The existing arrangement works fine , but I have always wanted an easy remote ‘power off’ ability, as I have had to check on countless occasions if I have left a soldering iron ON, my usual ‘gotcha’ is the compressor ‘kicking in’, in the middle of the night.

With the cost of internet enabled and Alexa compatable WiFi Smart switches coming down to a ridiculous price of £4.39, now was the time to make the addition of remote operation. 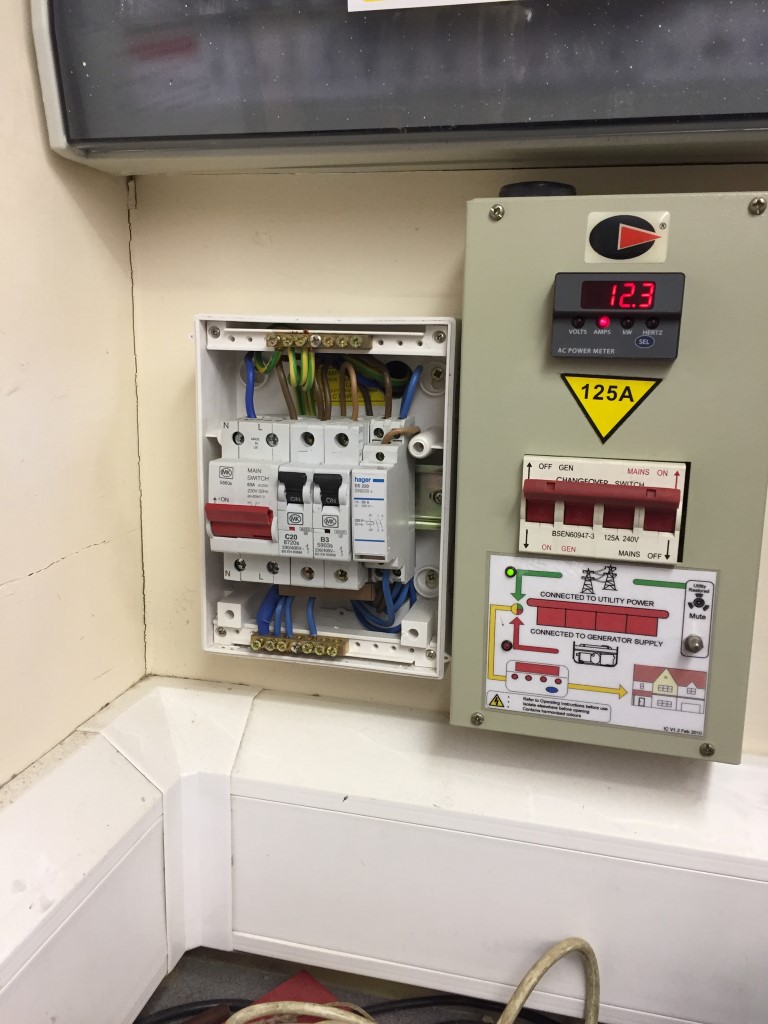 To the left of the change-over switch is the consumer unit feeding the Garage sockets via a 20A MCB, a 3A MCB is for the contactors control circuit via the latching stop buttons.

The idea was to install a Sonoff Basic WiFi Smart Switch to switch the supply to the contactors control circuit. 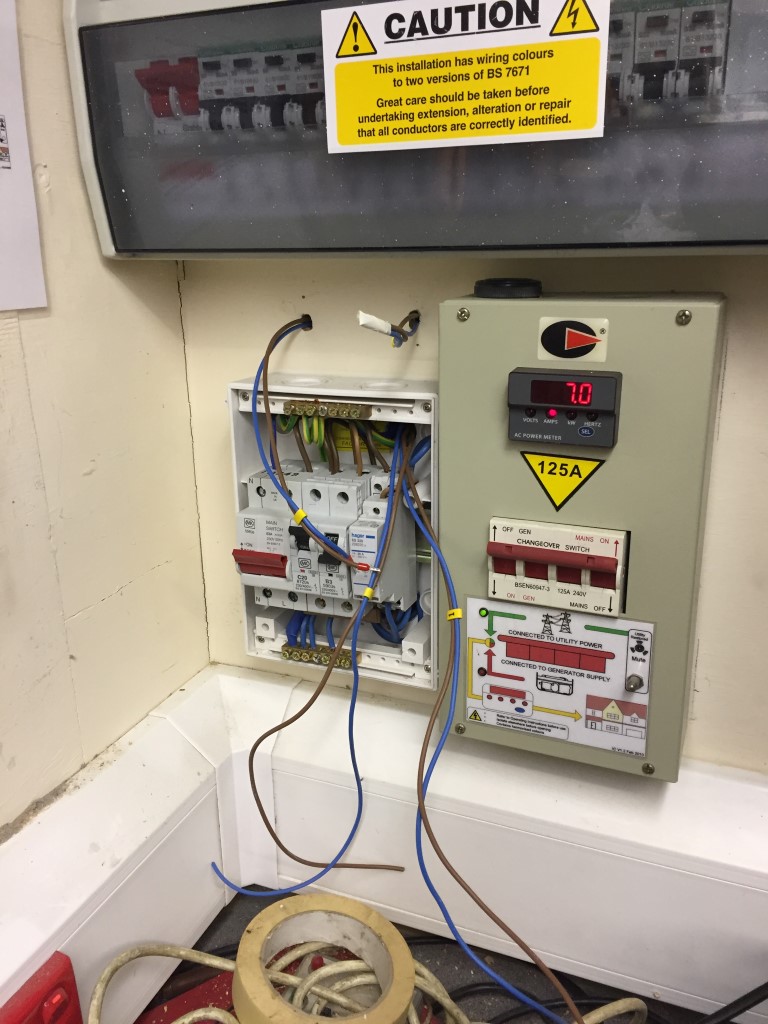 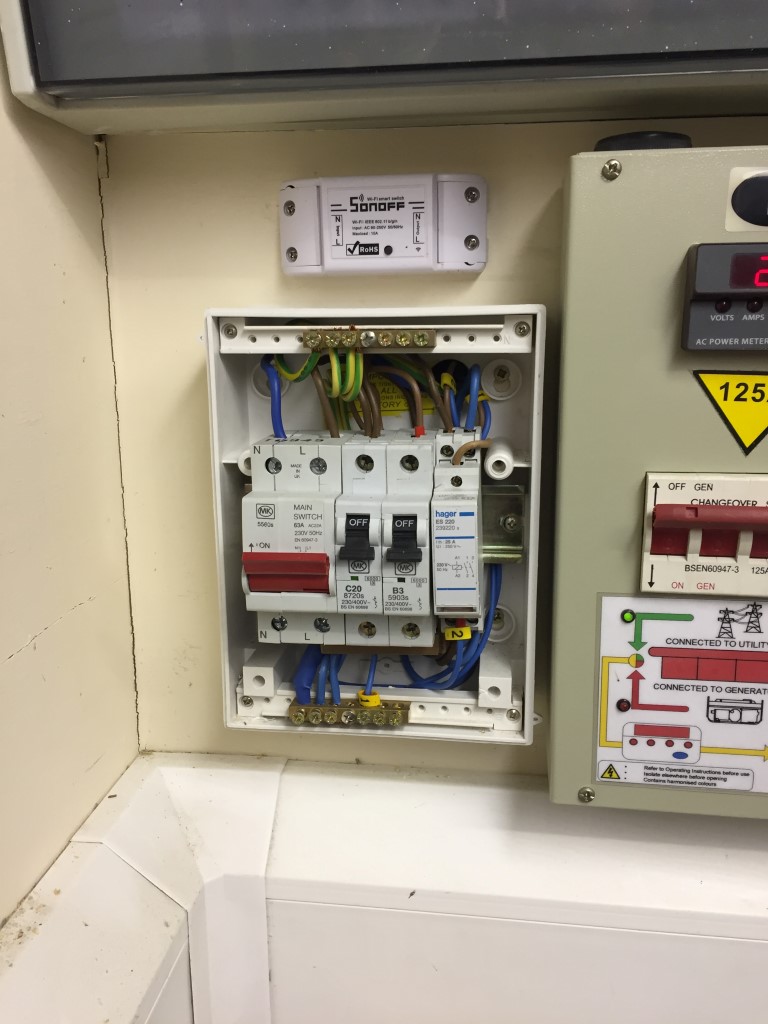 Sonoff connected and cables dressed in to consumer unit. 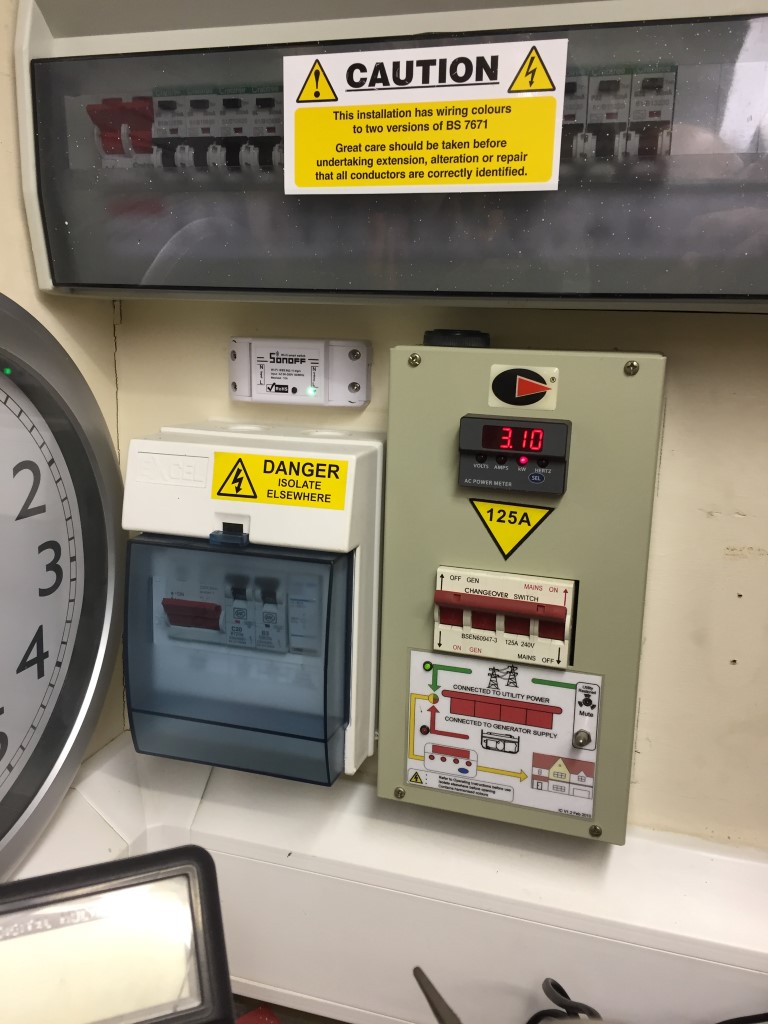 Completed job with Sonoff showing link to server established, before starting the work I configured the Sonoff in the house and enabled the power to be ON by default, once this was done I checked that it work in the Garage.

The configuration is very easy and the App is EWelink, also this is linked to Alexa, the image below is a screen shot of the EWelink App. 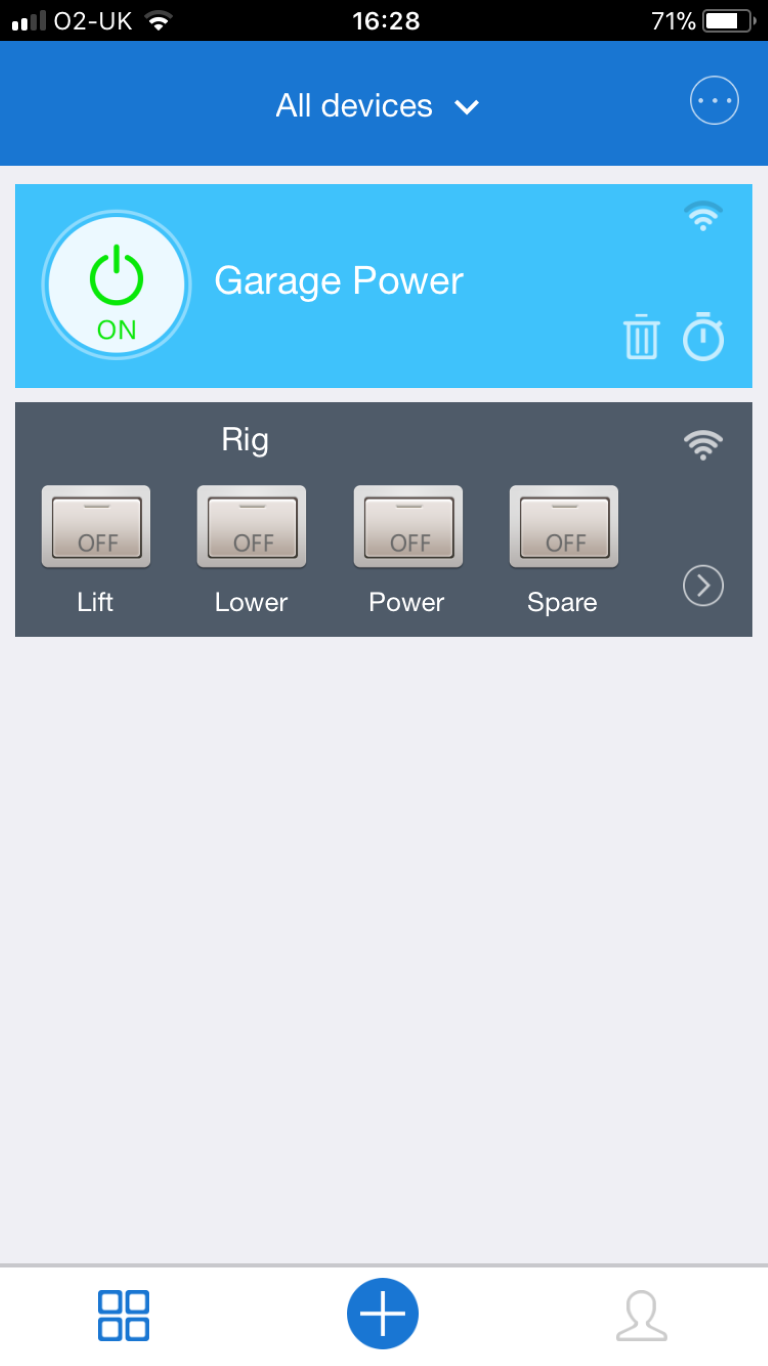 The blog on the Rig switching is HERE.

Update – 5 Jan 18, E-WeLink servers have failed this means that control of the Sonoff devices is not possible, no time given as to restoration of service 🙁

14 Jan 18 – Service back up and running and all Sonoff devices now working.