I currently have a Vaillant Thermocompact 624 System boiler which was installed in 2002 and some of the parts are now obsolete, so its only a matter of time before it needs replacement.

All new boilers now have to reach an ERP (Energy Related Product) minimum efficiency of 92.5% and only condensing boilers can achieve this, it does this by recovering the latent heat within the exhaust flue gases, this causes the water component of the flue gasses to condense and require disposal.

The boiler condensate produced varies in quantity and is acidic, therefore, only plastic parts can be used within the drain system (no copper or cast iron pipes unless the condensate has been neutralized first).

My existing boiler has no need for a condensate drain, however, when this packs in, any new boiler will.

I have read that if the condensate drains runs outside into a gully or soak-away, that the external pipe unless lagged or trace heated can freeze in the winter, and if the condensate can’t run away freely, the boiler will lockout until the pipe is thawed out.

So, thats the backstory, fortunately for me, the boiler is in the garage and also a portion of a 11/2″ (40mm) drain pipe runs inside the garage, before going through the wall to connect into the soil stack, the drain pipe carries the waste water from the washing machine, dishwasher and utility sink. 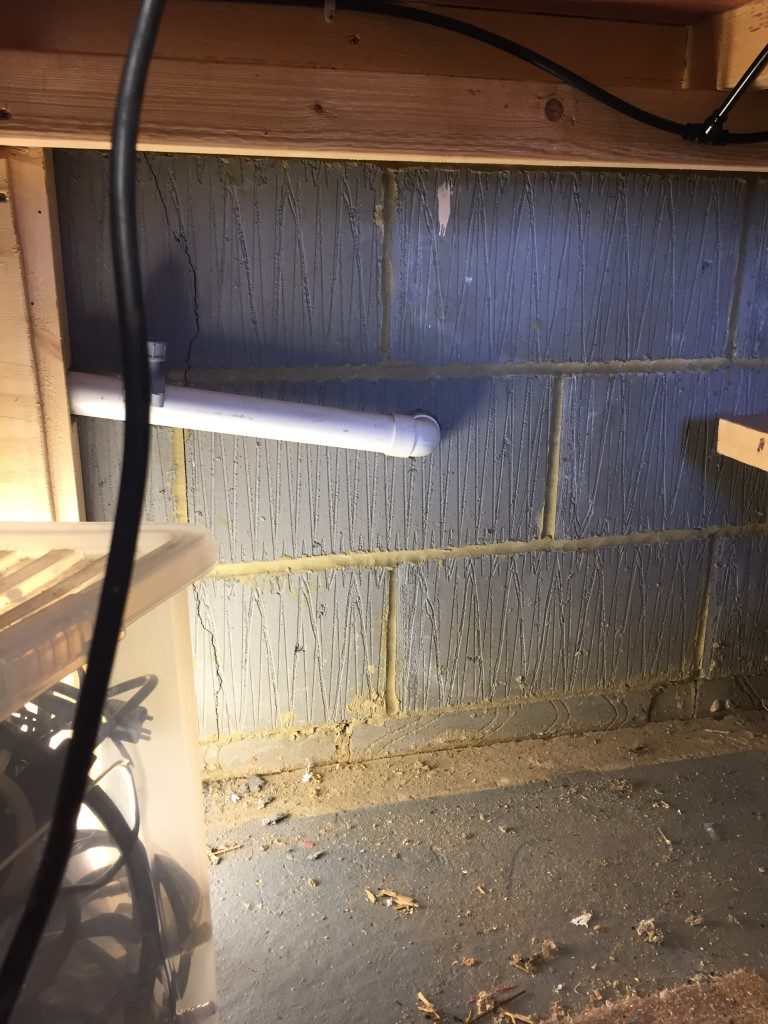 The pipe used was 22.5mm plastic overflow pipe from the boiler to the drain pipe clamp, the picture below shows the capped boiler condensate pipe in advance of the installation. 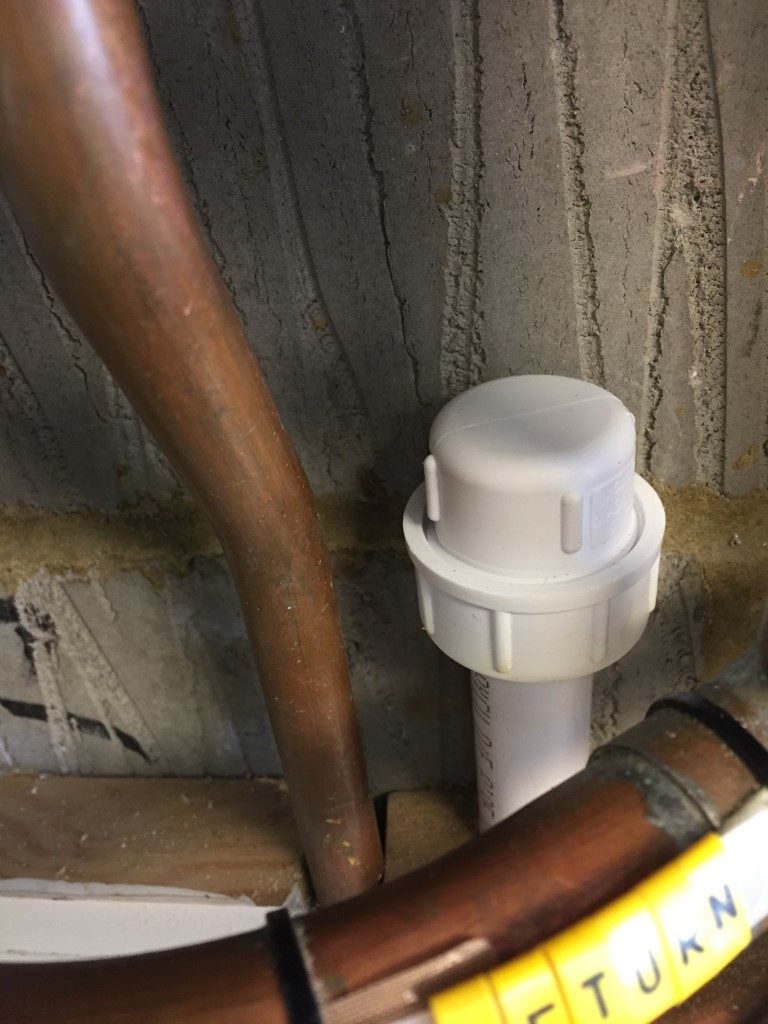 Fitting this pipe without taking the garage apart was a ‘challenge’ and took ages! 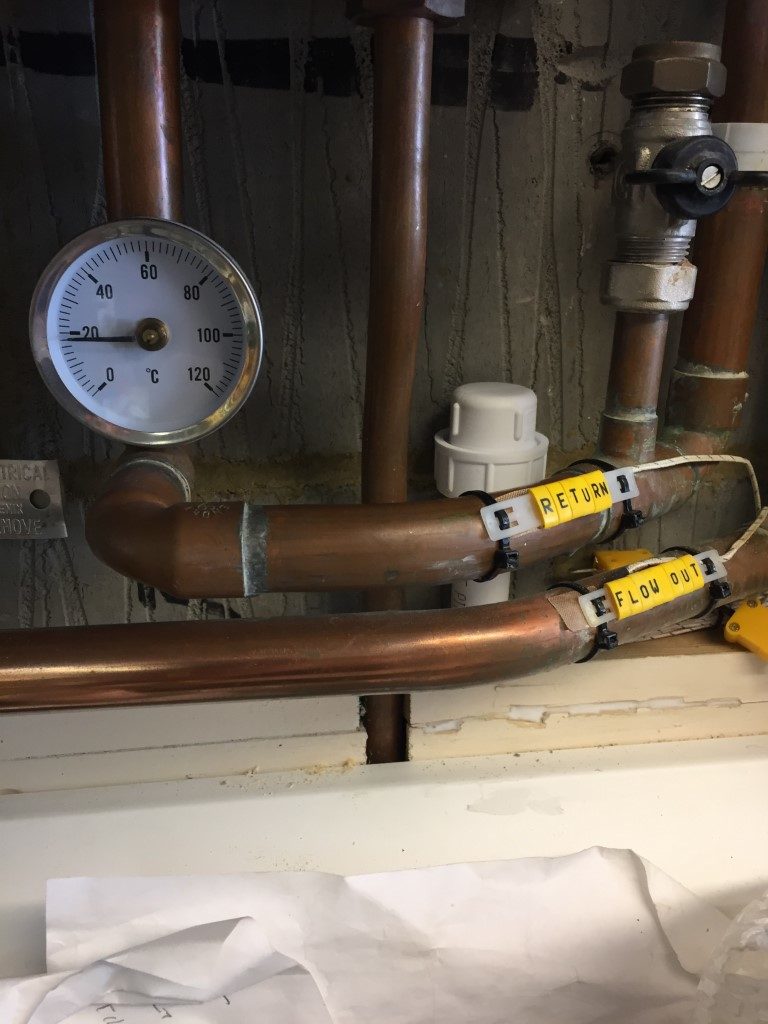 This pipe runs behind dado trunking where I used plastic cement to fix a 90 degree bend and ‘Tee’ with a capped stub so I can flush through if needed.

In this picture you can also see an earth clamp, this is fitted to the 15mm copper gas pipe  and is the main bonding conductor for the gas, unfortunatly it does not comply to BS7671 Electrical Regulations,  in so much as it is futher than 600mm from the point of entry and it is also installed after a branch, so I took the oppertunity to install a new clamp and 16mm2 main bonding conductor directly from the meters outgoing gas pipe to the consumer units earth bar, I could have used 10mm2 as I have a PME supply, but as I had the wire already, I made use of that. 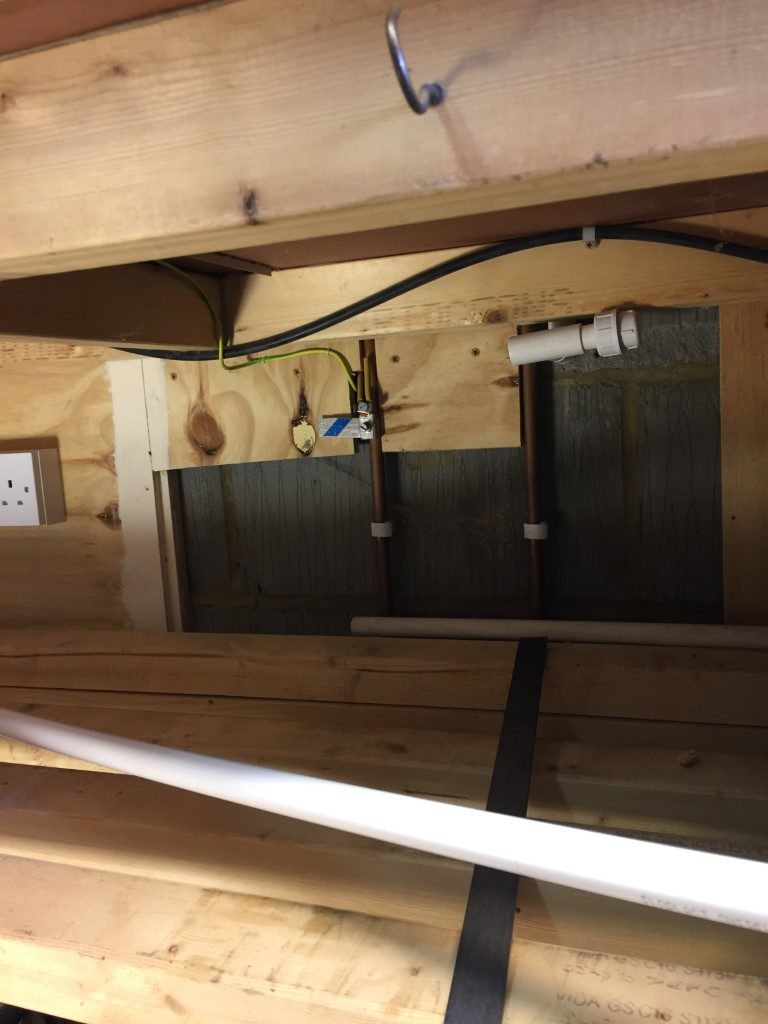 After doing the first drain I rechecked the pipe layout on a Vaillant EcoTech and it showed the condensate oulet on the other side of the boiler, so it was out with the drill again and fit another drain. 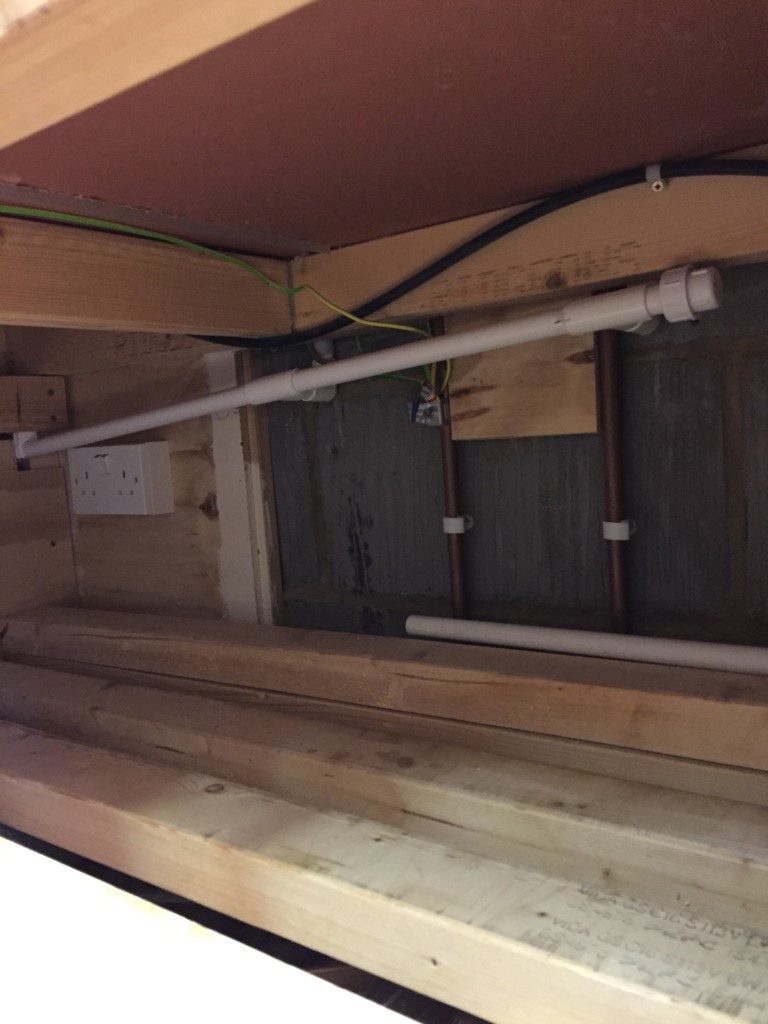 This is the new gas main bonding conductor clamp fitted with the cable sealed after being routed of the enclosure, note the quality pipe soldering done by the British Gas Smartmeter man……Nice! 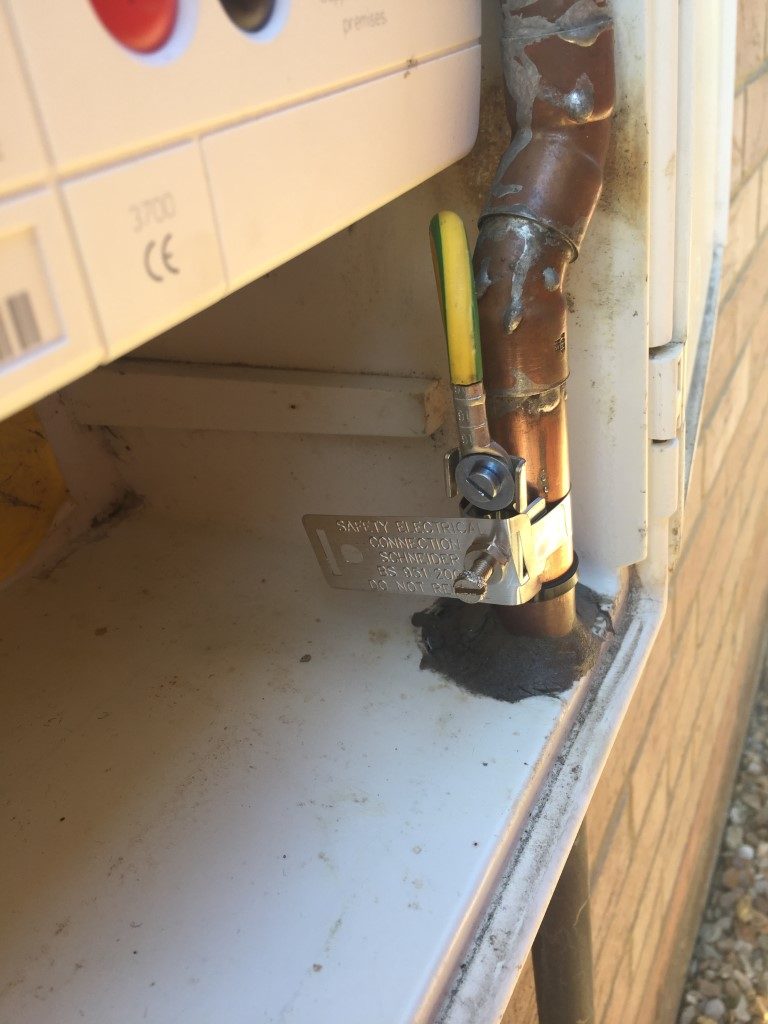 The additional uncapped drain below was a lot easier to fit as I removed the boilers isolator and frost stat to make more room. 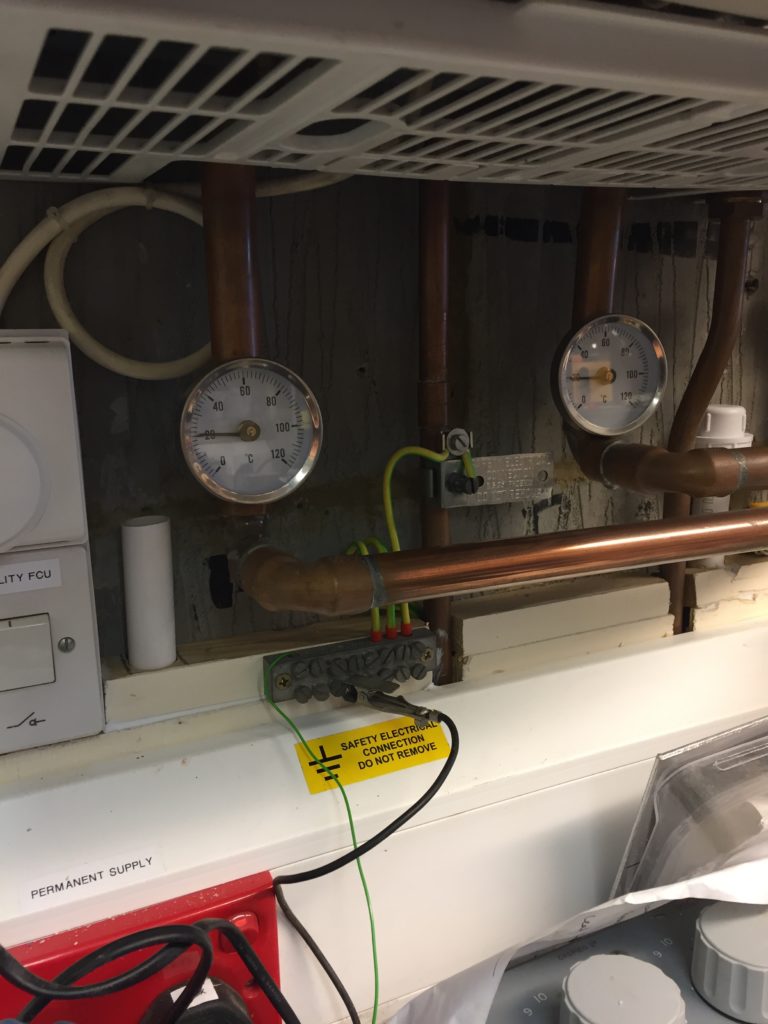 The drain has to have a fall of 43mm per meter, the pipe was taken to a 90 degree bend and then on to the drain pipe, the pipe is supported every 300mm. 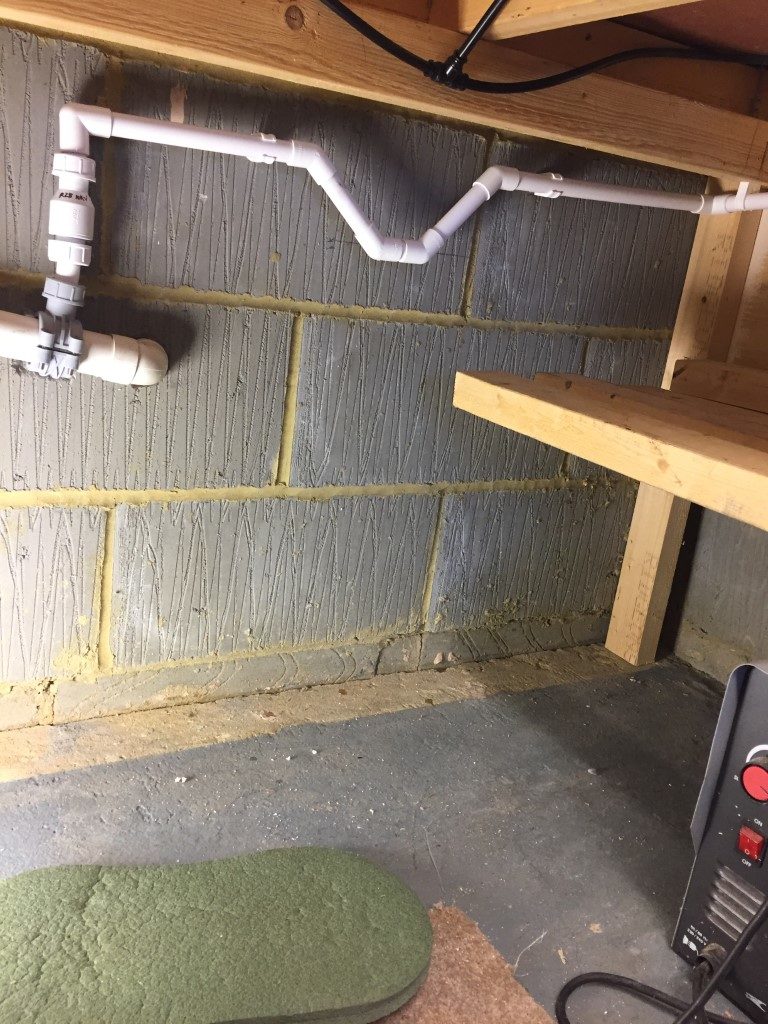 The  picture  shows a 75mm deep trap in the 22.5mm pipe, this then goes on to a McAlpine CONVALVE R28-NRV, this Non Return Valve will allow the flow from the boiler, but will restrict any back-flow from the drain pipe.

Installation of the NRV was very simple, I had to chisel the breeze block slightly so the clamp could fit without touching the wall, then drill a 15mm hole in the drain, debur the hole and fasten the 4 clamp screws and that’s it.

As the main drain pipe was at an angle and the condensate pipe came in vertically (the NVR will only work in this position), warming a small length of pipe and with an internal bending spring, I put a slight bend in the pipe, this was then cut to length and fitted between the pipe clamp and the NVR.

Once fully installed and all joints cemented, I ran a full bore water hose to check for leaks, once everything was checked, the exposed pipes were boxed in to stop any accidental damage (this pipe does form part of the boilers flue system when connected) and the garage was put back together again.

Not sure when my boiler will fail, but at least I’ve saved the plumber some time and effort and therefore I’ve saved some money in the long run.